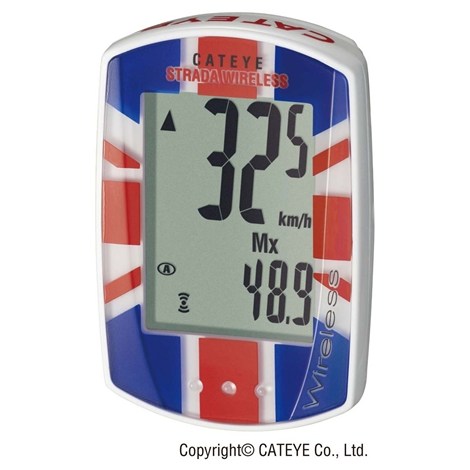 Cycle computers are becoming less fashionable than they used to be now GPS systems and even smartphones are more commonly being used to provide more information on your ride. However, they still have a place if you just want to know how fast you are going or how far you have cycled (who really uses, or can even name the other 6 functions?). What is clear though is that if you are going to use one it must be small, light, wireless (it isn’t the 1990’s you know) and above all; reasonably priced.

Step forward the Cateye Strada then which ticks all of those boxes, especially if you manage to get one below the silly £49.99 RRP. We got ours from www.cyclestore.co.uk who are selling the patriotic Union Jack version for a bargainous £24.99! Of course, it is available in other colours which are a little less garish as well as some that aren’t.

It’s certainly small, and light, and easy to use as it doesn’t really have buttons – you just push the bottom and it activates the switch underneath to cycle through the 8 functions; current speed, average speed, odometer, maximum speed, trip distance 8, trip distance 2, elapsed time and clock.

Installation is straightforward too with options for bar or stem mounting and the wireless sensor easily attaches to the fork. We tried it on a road bike and an MTB with front suspension and it worked fine. The sensor and magnet do have to pass quite close to each other though so be precise in the setup. The Strada actually handles two separate wheel sizes and can therefore be swapped between bikes – if you buy a spare fixing kit, normally around £20.

We tried it on- and off-road and even set it up on the rear wheel of a road bike for use on a turbo trainer. The quoted range is 70cm from sensor to computer and with the sensor near the bottom bracket we managed to receive a reliable signal with computer placed on the top-tube. It worked sometimes when up on the bars but it was a touch intermittent. This is actually a better performance than we got out of the Cateye Velo used on the Golden Minute challenge where it had to be on the seat tube next to the wheel in order to get a signal. We’re not guaranteeing it will work with your turbo trainer setup but you can give it a go. The only alternative is to go a step up and get the dual wireless Strada which is designed to work from a back wheel sensor and alsogives cadence – but this comes in at an RRP of £79.99

Basic computers do come in cheaper than the Strada but this little unit looks nice and is from a well-established name which counts for a lot.