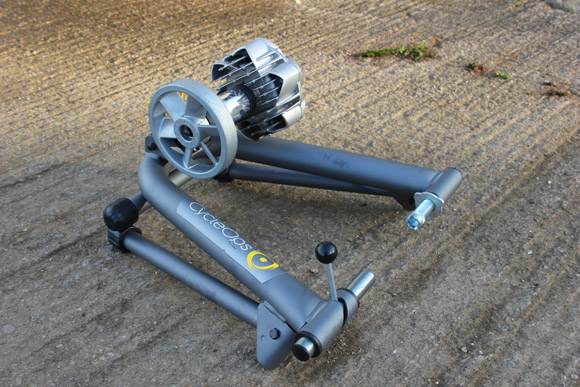 When looking around for a turbo trainer to use over winter I had to do a bit of reading up to find out what the best sort of trainer would be and found that there are 3 main types of trainer. Trainers vary on how they provide resistance and it’s this resistance unit that defines how they feel.

The cheapest units are usually with wind resistance trainers which have a fan as the resistance unit. These usually provide a fair amount of resistance and can be quite hard to feel much progression at differing speeds. Also as you can imagine they tend to be pretty noisy.

At a higher price bracket you will find the magnetic resistance trainers which have a resistance unit which can often be altered so that it provides more or less resistance. Some have remotes that can be attached to the handlebars allowing you the alter the resistance of the unit as you ride. Although not as noisy as the wind resistance units they can get a bit of a drone on so not great if your living in a flat or have thin walls.

Finally you have the fluid resistance units which are usually filled with oil or some form of hydraulic fluid and charge their resistance by pumping the fluid around inside a chamber. The fluid units are certainly the most ‘natural’ feel when cycling and as a bonus they tend to be quieter than both the wind and magnetic units.

After looking around at a few prices I decided that the Cyclops Fluid2 looked like it would be a good unit and ordered it online.

Straight out of the box the Cycleops Turbo Trainer is pretty simple to set up with just the resistance unit and axel clamp to attach to the metal frame. The plastic feet on the Fluid2 allows you to adjust the level of the training unit so as to keep it stable with the bike attached.

Fitting your bike onto the trainer is simple and by simply adjusting the threaded bolt to suit your bike the trainer has a quick release system that clamps onto the skewer of the axel. Cycleops also provide a replacement skewer that makes the bike steady when attached to the trainer.

The amount of pressure on the rear wheel is adjusted by the yellow handle at the rear which snaps into position to give a snug fit against the wheel.

After a winter of using the trainer I purchased another for use on our Golden Minute challenge, then I ran into an unexpected problem. The bike we use for the challenge is a Schwinn Cutter fixed gear bike and as such it does not have QR hubs. As a result it was not possible to fit the Cycleops Fluid2 to the Schwinn without first purchasing a new wheel that featured a QR hub.

In order to improve stability while people push themselves on the Golden Minute challenge I also purchased a Cycle ops climbing riser block which keeps the bike nice and stable and raises the front wheel to the same height as the rear.

The Cycleops Fluid2 has been used throughout 2012 at Urban Limits events and has proven its solid build quality and ease of set-up. Getting thown in and out of cars, pushed to the max by numerous members of the public and left dormant in a freezing cold barn in-between. Impressive stuff, the Cycleops is a well built trainer that has served me well and should prove useful over the winter months again…

WARNING: 5 Lessons for a Born Again Cyclist
The life of Grimes is not for me