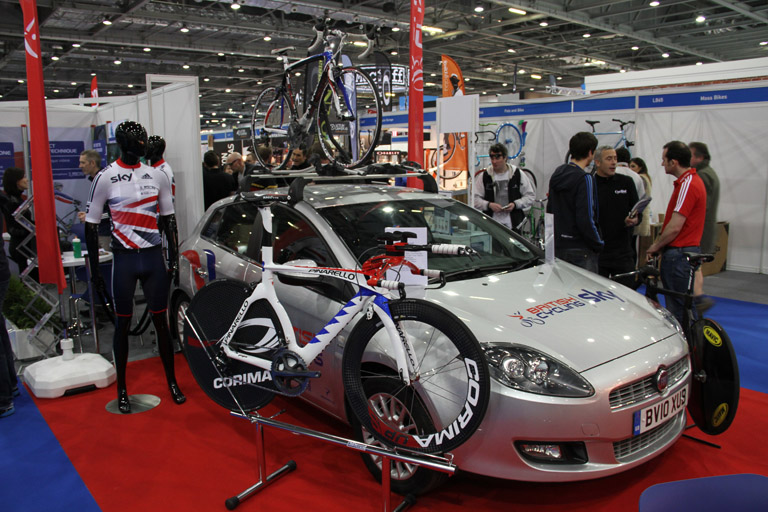 The London Bike Show 2013 offers a great day out for the cycling enthusiast, but does come with a financial health warning. Despite the low entry cost at just £16 per adult (and you can take your under 16’s in for free) with so much sophisticated carbon design and new power trains around there will certainly be something to tempt you to splash out. Having said that, on the other side of the Excel London and open to bike show ticket holders is the London Boat Show; when you see their prices that high-end tri-bike suddenly seems like a bargain! We spent the day yesterday wandering the carpeted aisles to see what struck us as emerging themes for 2013.

One of the most striking features of the exhibition hall is the prevalence of some new entrants to the UK cycling market as manufacturers and publishers try to cash in on the explosive growth in cycling. And why not, last month Boardman Bikes’ distribution through Halfords alone resulted in the sale of 4,500 units.

Among the stands to make the biggest impression was Starley Bikes. The Manchester based firm has adopted the name of John Kemp Starley, the inventor of the safety bicycle which most of us would recognise as the original modern bike. Offering a host of customisation from their onsite paintshop Starley are producing very attractive racing machines.

You may have previously had a play with the Foffa bike builder on their website, seeing a bunch of their bikes in the flesh is certainly pleasing on the eye. The whole thing only started in 2007, and such is the company’s size and connectedness to their market, that we were greeted on the stand by Dani Foffa himself.

It’s not only Foffa though that are are picking up trade in the desirable fixie market. The desirability of a really well designed city single-speed is bringing some of the bigger players with race pedigree to the market as well; Wilier had some particularly nice examples on display, with the Ponteveccio Steel White being one to drool over. Probably the most striking single speed that we saw on display was the stunningly designed Rizoma 77/011 Metropolitan Bike. The billet aluminium components and belt drive on the open diamond carbon frame pulled together an extremely good looking bike.

Sticking with belt driven bikes and the city theme, we were struck by some of the contenders in the folding bike market. A quick play on the Strida folding bike challenged any preconceptions we had about the design. Whilst the compact upright format looks pretty strange, it offers a surprisingly solid ride; our only concern was that the narrow bars and small front wheel meant steering was a little flighty in tighter corners.

The test track at the show though seemed to provide most attention to a folding hybrid. The Gocycle G2 was unrestricted from its road legal set-up meaning it was really quick! And as The G2 offers a combination of a collapsible city bike and a powerful hybrid drive system which will surely appeal to many; though the price tag of £2,799 will server to restrict its appeal.

The Gocycle was by no means the only hybrid on show, as many new models are entering the UK market; and Kudos Cycles in particular were attracting a good deal of attention from attending enthusiasts. A broad range of styles and designs with most prices starting at £595 probably explains the interest. A number of after-market solutions were also present, for those who simply cannot fit another bike in! The most interesting of these was probably the Revo Wheel; a replacement front wheel that offers an encased lithium ion rechargeable battery, handlebar mounted console and sensor to attach to the crank arm to offer pedal assist. The result is that you can choose a wheel to fit a current bike and swap that same machine between hybrid and normal modes by simply swapping the wheel over.

Finally, it was hard not to notice the continued rise of Pinarello as the dominant name in the road bike market. The floorspace that Pinarello consumed dwarfed its competitors so much so that you could be forgiven for thinking that you had stumbled on the bike racks from Reading station; that is until you took a closer look at bikes that were arrayed in rows. With Sky team bikes and those sporting the British Cycling livery, the Pinarello success story in Britain is clearly tied to their sponsorship of some of the biggest names in British sport. With the recent announcement that they will also effectively enter the high street, following their recent deal with Halfords (understandable when you witness the sales figures this has generated for Boardman) you can expect to see many more on the road in 2013.