Urban Limits > Events > Sky Rides > What’s it like on a Sky Ride?

I’m a lone wolf cyclist really. Cycling is one of the things I do when I need to get away from people. Sure I’ve ridden with groups in the past but I’ve always found them kind of annoying – everything that should be simple suddenly becomes complicated. Even with off road groups. If I fancy a short detour past a nice café to pick up a bun and a cup of tea I want to just do it and not have to convince a load of other people that it’s a good idea.

Sky however are – and have been for some time – supporting a major initiative to get people cycling. It’s called Sky Ride and basically it’s a lot of organised rides all over the country, led by small teams of volunteers. So as a supposed cycling advocate I thought it was about time I stopped being so antisocial and looked into this properly.

The first thing I would say is that if you’re looking at getting into cycling, or picking up a bike again after a long break then Sky Ride is absolutely ideal and you must go on one immediately.

There are three levels of difficulty. Sky Ride is supposed to be a recreational cycling initiative: I’ve had a look at some of the routes and these levels definitely refer to normal human beings rather than Lycra clad loonies.

All you have to do is plug your preferred location into the web site and it’ll suggest rides (and dates) near you. You can then go ahead and book your place on one.

Incidentally, if you are just starting cycling don’t be frightened by apparently large distances. I wouldn’t be thinking about any 50 mile excursions right away but 5 miles is perhaps a little over half an hour’s ride (at a similar effort level to walking for half an hour).

There just happened to be a 13 mile long “steady” ride near me at a time when I was free so I put my name down.

I left plenty of time, so I was about 15 minutes early when I turned up at the rendezvous point – the car park of a local sports centre. There were three people in a prominent position in blue “Sky” cycling tops clutching bikes who looked quizzically in my direction. “Sky Ride?” I asked. “Yup,” said Carol, checked my name off the list and handed me a free high-viz Sky bib. “You don’t have to wear it,” she said, “but it can be kind of useful if we get broken up.” We chatted a bit and I chatted to other riders as they arrived.

There were people with a range of bikes and wearing a range of kit. Some people had the full Lycra ensemble and bikes costing an arm and a leg. Some people had tracksuit bottoms, trainers and a basic high street mountain bike. Most people were somewhere in between. There was even a chap and his young daughter on a tandem, which I thought was exceptionally cool. Refreshingly there was no snobbishness, nobody was sneering at anyone else’s bike or judging anyone because they were wearing last year’s fashion.

Most people, but not everyone, chose to wear helmets. Under 18s have to in order to go on the ride but for adults it’s optional. That’s kind of an important thing to mention because if you don’t have a bash hat it doesn’t mean you can’t come. Do invest in a pump, a spare inner tube and water bottle however. These are considered essential items. More info here.

There were times when the group would need to bunch together and times when we could – and perhaps should – ride two abreast. They’d tell us these things at the appropriate times but would appreciate it if we shouted the orders onwards as someone at one end of the group can’t always shout loud enough to be heard at the other.

Echoing information is pretty normal in any group, you can often hear ripples of “car back!” going from the back to the front or “slowing!” from the front to the back.

Armed with this (and a few other safety instructions) we hit the road. 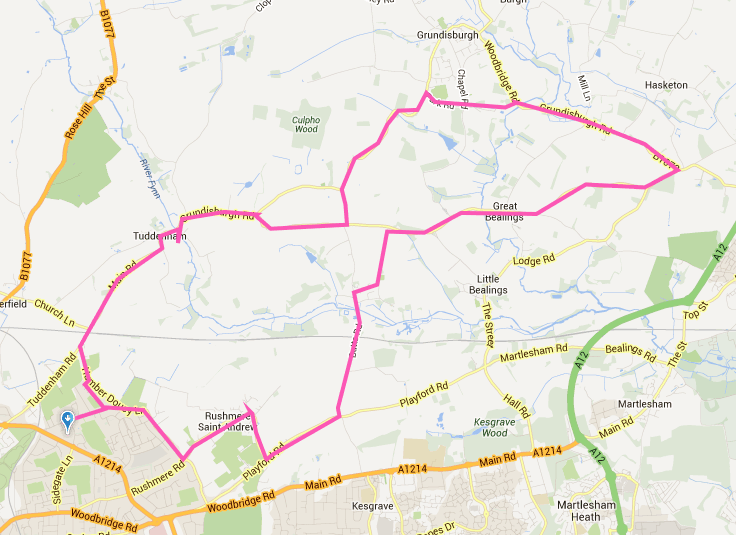 Things started off pretty well, once we’d got through the first couple of junctions and had the first couple of orders we’d all settled in. Then we went through Tuddenham St Martin. For a newcomer the climb out of Tuddenham is quite an up. One of the less experienced members of the group had a bit of a dizzy spell so one of the ride leaders stayed back with him while the other ride leaders found us found a safe place to stop. Meanwhile she established any possible medical problems and fed him energy gels and rehydration liquids. He was right as rain after that: it was probably just a case of him going out too hard and too fast on the first hill. It might have been a bit of a shock too when all the more experienced riders streamed past him at the start of the climb and he may have felt some social pressure to try to push too hard. It’s one of the simple facts of cycling though that sometimes, at that time in that group, you are the slowest rider. Even the fittest cyclists have off days and end up at the back. Waiting for people is part of the general protocol of cycling, so if you are on a group ride don’t feel the need to rush up hills, just make sure you get to the top. The more experienced cyclists will often be secretly glad of the break (especially the very, very experienced ones if you catch my drift). As an aside it’s perhaps worth mentioning that one of the reasons groups break on hills is because of different “rhythms” of climbing technique. Quite simply the techniques people use to climb differ and disturbing someone’s technique by forcing them to go slower than they want to can mean that a hill they would have found easy suddenly becomes rather difficult. The former patient showed no sign of a relapse, but the ride leaders and some of the more experienced riders checked in with him every now and again just to make sure. From then on we set about bimbling around the beautiful Suffolk countryside at a comfortable pace, chatting and riding. Sadly I neglected to get it together to take any photos, so the two I’ve used here are actually from another ride this week on a similar route. One which it turned out I didn’t know quite as well as I thought and I accidentally took an 8 mile detour. You won’t have that happen on a Sky Ride!

What struck me more than anything else was the level of organisation and professionalism. The ride was well organised, the ride leaders were friendly and chatty but assertive when they needed to be. They managed the pace and looked after the group effectively and efficiently. It all gave an air of confidence, that we were safe, we were being looked after. Even for an experienced cyclist this was encouraging and despite being a lone wolf I actually thoroughly enjoyed the experience. So this is going to be the first Sky Ride of many I feel, although next time I think I may pick a “challenging” route. I like a nice bimble every now and again but “steady” was just a little bit too bimbly for me…