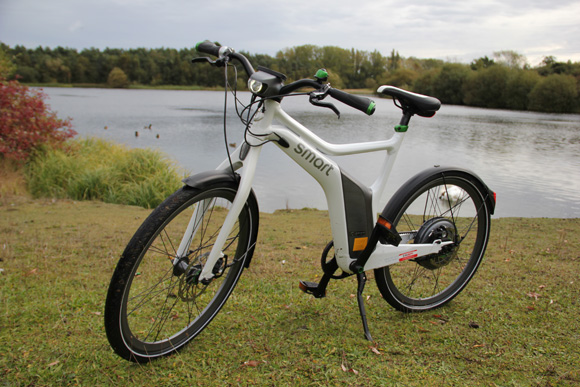 Electric bikes are becoming more and more popular thanks to new technology making them light enough to be practical.

The smart ebike works as a pedal assisted bicycle with your legs getting some considerable assistance from a 200w electric motor which is located in the rear wheel hub.

Pedal power is transferred to the rear hub via a pretty cool carbon belt with carbon teeth which is designed to remove the need for maintenance, it’s also aids in the much added need for lightness as the smart ebike weighs in as a hefty 26kg. That weight is partly the motor and also the lithium-ion battery pack that is attached to the centre of the frame

The pack is removable and can be re-charged from any standard power outlet giving the e-bike a rough range of 62 miles depending on conditions and how you use the system.

Controlling the system on the handlebars is simple, moving the bar into the right section increases the assistance from the electric motor, moving it to the left reduces assistance and moves it into a regenerative mode which makes it harder to pedal but re-charges the battery pack . Moving it into the middle just makes it like riding a ‘normal’ bike.

With three gears to choose from you can also change how hard it is to pedal and with the variable motor assists it does not really need any more gears. Braking on the smart ebike also has a regenerative charge effect.

I took the bike out on some of the cycle routes around Milton Keynes and the temptation straight away was to wack the assistance straight up to see how it would go. Due to legal regulations the smart ebike is limited to 14mph so once you pass that speed on full assistance you do get some resistance building up so the most I managed on the flat was 23mph which is enough for a standard commute.

Next I decided to try riding it in the regenerative mode which seems that unless you are going downhill is pretty tough to ride and just feels like increasing the resistance on an exercise bike, if you’re looking to burn calories though then it’s a great idea!

The weight of the bike does become more noticeable on rougher surfaces such as cycle track that’s been annihilated by tree routes and it does feel quite jarring. I reckon for the urban environment some front suspension forks might improve comfort.

Handy features include a USB interface which allows you to charge up mobile devices (smartphone cradle optional) and as an optional extra you can fit a pannier rack for carrying larger items.

Priced at £2,495 the eBike comes with a two-year warranty and offers a tempting proposition for the urban commute without turning up to work like a red sweaty mess.