I have to confess that I approached London with a degree of intrigue for this year’s Tour de France. I had been there for the prologue time trial in 2007 and back then had been impressed with the way in which the capital was prepared to put on a show for cycling. 7 years on would there be a marked difference? These have been seven quite important years for cycling.

On the competitive scene we have witnessed rip roaring track success at two Olympic cycles, Beijing and London, the advent of the SkyProCycling team, knighthoods for Hoy, Wiggins & Brailsford, and now Froome aiming to return a third straight win for a British rider. Against this backdrop the focus on improving health and activity across the population has undoubtedly been stepped up dramatically to include ‘Boris Bikes’ in numerous major towns and cities, an explosion in guided rides and cycling promotion events, so that the impact on commuter and leisure riding is genuinely starting to be seen.

First thing to note was that that fan provision was more extensive – in 2007 one single fan park seemed to be more than sufficient, impressive even, but this year it was viewed as an inadequate provision for the world’s largest annual sporting event and the city’s aspirations to be a cycling city, so areas in Green Park, Trafalgar Square and the Queen Elizabeth Olympic Park were all given over to the festivities.  Running over 3 days, these spectator hubs would provide a constant attraction from the moment live race coverage started and far beyond.  Starting at 11.00am on Saturday 5th and not concluding until the Green Park site closed its gates at 9.30pm on Monday 5th, this 3 day, 3 venue cycle-fest made abundantly clear that when the tour comes to town, London is as ready as anyone to celebrate. 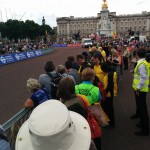 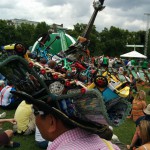 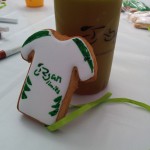 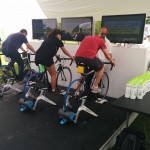 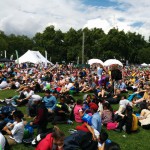 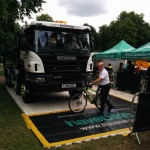 Getting into town at noon, it already felt like we were already late for the party, crowds were gathered four deep in places along the mall with many looking like they had been camped there for several hours. As tempting as it was just to bed down for a while and await the caravan (a series of carnival style floats that the sponsors send ahead on each stage) followed by the peleton, we went on in search of the rest of provision that had been made for fans and casual observers.

The Green Park spectator hub was accommodating a large crowd who were sitting with eyes trained on the large screen, various sponsor stands also providing some entertainment options for young & old, or shopping treats for those who just get carried away with the moment.  Whilst we appreciated the ‘Bon Maman’ cakes and Fosters Ridley non-alcoholic beer, the best set-up was definitely provided by Skoda. A stand that boasted a cycle challenge to compete against friends and strangers was a great draw for the keen riders, but possibly more appealing still was the ‘Decorate a Cookie’ table with iced biscuits in the shape of jerseys that you could turn into any tam strip to suit your tastes! There were also plenty of pleasures to grab some food with every taste accounted for.

From here, we headed to Trafalgar Square for the second hub which naturally, given the constraints of space, could not afford passing traffic all the same activities as the previous one.  Unfortunately for the organisers, the large banner adoring the top level written in letters two feet high stated boldly ‘Allez Cav!’ – still, once again the crowds were resplendent many looking like they had determined that the best view was always going to come from a large tele. 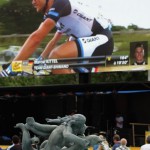 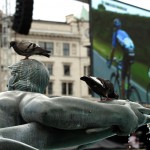 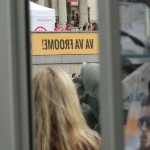 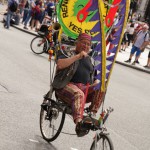 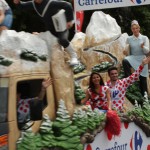 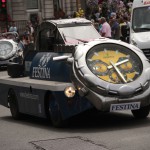 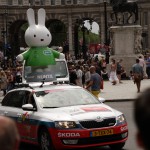 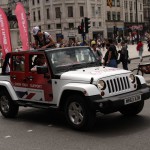 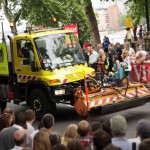 After a short stop at the top of Northumberland Avenue to watch the caravan coming through, we headed down to Victoria Embankment a good hour & a half ahead of the race to ensure that we found  decent spot. It was a pleasant surprise to find that it was not just the faithful race watchers who had shunned the fervour on the Mall for a more peaceful view down by the river. On our arrival the road was already rammed with crowds 3-4 deep on both sides, bridges filling up quickly (despite the best efforts of the stewards to keep people moving), and more adventurous positions on walls and lamp columns being quickly snapped up.

We were fortunate to grab a decent spot on stone balustrade opposite the 3km marker, and not before time. Over the following 30-40 minutes the crowds thickened fairly rapidly, swelling to a depth of ten or eleven right along the road; it felt like everyone wanted to be there and be part of the Tour story. It wasn’t just lycra clad enthusiasts either, out to show off their tanned and waxed calves, this was a very mixed crowd, you sensed some had just been swept along by the euphoria but many talking knowledgeably about who to look out for and whether anyone other than Marcel Kittel was going to win the stage.

And just as the crowd grew, so did the tension, texts and Facebook updates coming in, strangers sharing what they knew of the race as it was unfolding up the road & then they arrived! Thundering past at incredible speed and about 3 minutes later, somewhere off to our right the roars of the crowd on the Mall welcomed the German stage winner, of the Tour de France in a very British way. 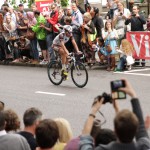 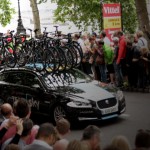 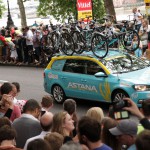 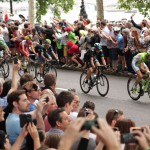 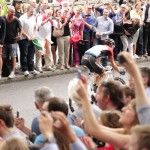 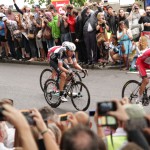 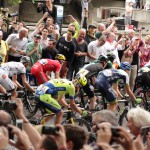 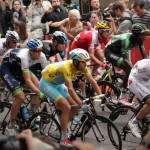 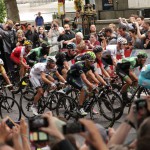 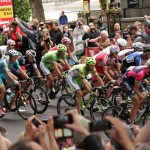 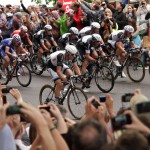 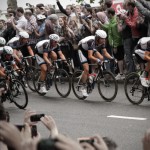 In 2007 when I told people I had been to watch the Tour, I always felt it needed explanation; why this was such a truly great event and why cycling was worth watching. 7 years on no such explanation is required, it seems that the entire nation is watching and riding.