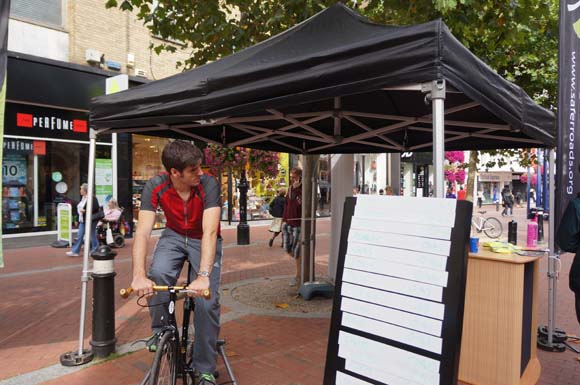 The Urban Limits team were in Reading for the final event of 2012 where the fastest time of the year on the Golden Minute Challenge would be able to win a £250 voucher for AW Cycles. The team were set up in Broad Street talking to local cyclists about cycle safety and handing out local cycling maps and information.

With the darker evenings approaching and an increase in cycle casualties recorded in October and November Urban Limits were encouraging cyclists to make sure they could be seen with appropriate lighting and high visibility clothing. Handed out at the event were the Urban Limits backpack covers, which are easily fitted and aid in keeping cyclists visible as the nights draw in.

A great turnout of cyclists meant that the Golden Minute challenge was our most competitive ever with many entrants managing times over .40! In the end we actually had a draw with two entrants setting an impressive time of .47, so the AW Cycles voucher was split in two with Steven and Ray getting £125 each.