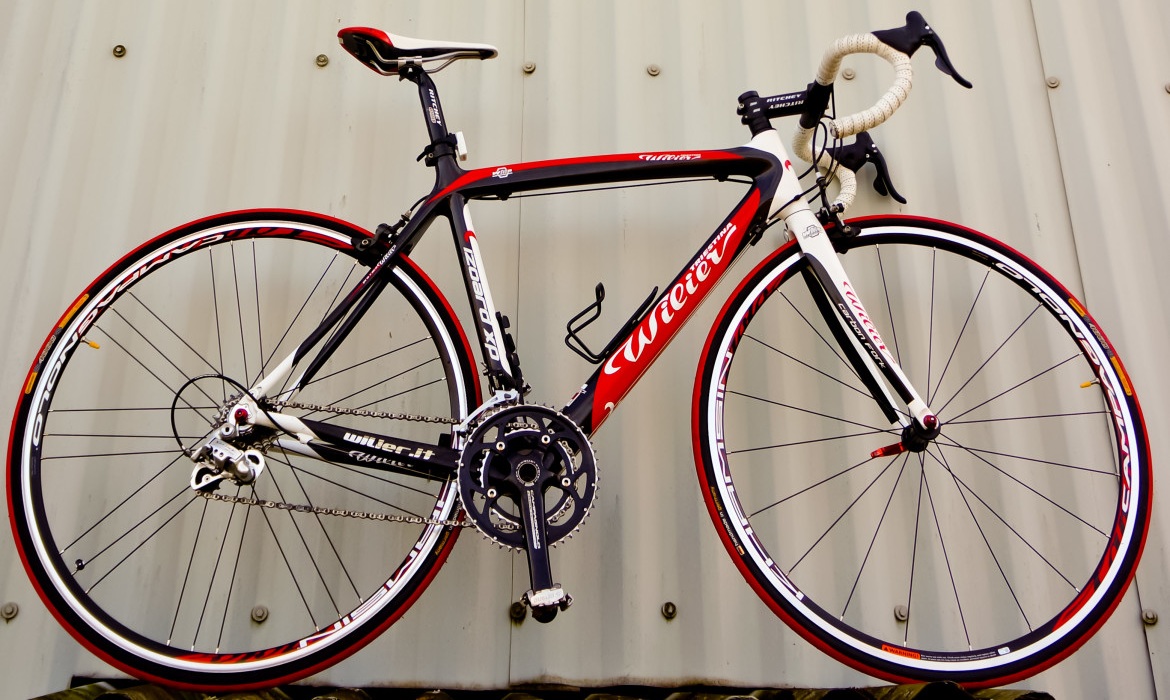 There is something more contagious than Bird Flu, SARS or even Ebola – it’s CARBON. Once your friend rocks up with some carbon bling it’s impossible to resist and you start working out how much you can get for your old bike on eBay and whether the kids really need food this week.

Logic goes out of the window too, my previous ride was actually a pretty light aluminium Bianchi from the early 2000’s with some tasty Campag carbon shifters. Unfortunately it was a little too much of a museum piece and getting spares would prove tricky – not to mention the slight problem with the tendency for the frames to crack (they made them too light). So when I was made an offer I couldn’t refuse I knew I would be after some carbon action.

I briefly flirted with the idea of buying new as there are a few no-name bikes out there, often on sale, that can be picked up with low-end Shimano groupsets for around £850. I was tempted but if it’s bling you are after you need to get something from a recognised brand and it should look pretty too! After a week with £800 burning a hole in my pocket and several failed bids on eBay I managed to pick up something that fitted the bill for me…

If I’m honest, the bike was bought 75% on looks with less concern over the spec – especially as I have a habit of upgrading components on my bikes. I have had Campag gear before and it does stand you apart from the Shimano clones and it should really be compulsory on Italian bikes.
The bike was in good nick, the previous owner has only ridden it a dozen times in 18 months and the saddle and wheels were never used. A quick once over to check gears, brakes, hubs, headset etc was enough to convince me I’d got a bargain – especially as it had retailed at around £1500.

Although it’s a race bike the setup is much more friendly than my previous bike which demanded to be ridden hard and did its best to remove your fillings on each trip. The carbon frame and forks are quite comfortable on the roads and you aren’t left with white knuckles tackling sharp bends. Think of it more of a sport tourer than an out-and-out race bike.

The less racy setup is confirmed by the inclusion of a compact chainset which is becoming much more popular. Most people wouldn’t miss the 52t top ring and the 34t bottom makes climbing much easier. It also means you can keep it in the top ring much more which is definitely ‘pro’. Dropping down from the top ring is bit of a jump but that can be counteracted by deft use of the right-hand lever on the Campag shifters.

On the shifters (brifters, whatever you want to call them) I am disappointed to see that Wilier chose to skimp and fitted the discontinued Xenon shifters in plastic, rather than the metal Veloce units. The price difference is quite significant but it really lowers the tone.

After several hours in the saddle so far I’m pleased with how it rides and hills are met with a little less trepidation than before. The only minor niggle is that the bottle cage mounts appear a bit low and are harder to access. This may be due to the oversized tubing on the frame.

Things that had to go

Well, first up the original wheels were swapped out for Campagnolo Khamsins wrapped in Continental Grand Prix 4000’s (in red). The Miche wheels looked fine enough and the hubs were kind pretty with the anodised red aluminium but I preferred the look of the Campy rims and the cost to change was negligible thanks to some tidy dealing on Bay again.

The saddle lasted one ride before it was off. The Selle Italia Q-Bik Saddle was horribly uncomfortable despite lots of padding and will go in the spares bin. Saddles are a personal thing and what suits one may not suit another so perhaps it was just me. The replacement Fizik Antares is a right little beauty though. The flatter profile suits me better than the immensely popular Arione model and being less popular means it can be had for a bargain!

Things that will be going…

The next thing that’s leaving is the rear mech. I have no idea why a silver mech was supplied while the rest of the groupset was black, that kind of thing baffles me. It’s also broken. I hadn’t noticed at first but when I came to use the rear barrel adjuster it just kept turning and turning without changing the amount of cable pulled. The screw has snapped inside the body of the mech which means some serious re-engineering to fix or shelling out on a replacement (in black this time).
I also plan to change those shifters which may prove a tricky little task and could well be the subject of a separate article.

So, how do the two used carbon bikes under a grand stack up? You will have to wait for the final part of this series to find out when we take them on the road together.